It has only been since the death of my Grandfather (almost 2 years ago) that I finally saw how much like him I am. Even as I write that, it seems a little strange, because as he lived, and as he talked, I did not see the likeness, it is only through his interests and possessions since his death, as they (such as books) have come into my life and I see them resonate with me.

I said before in a blog post that my house feels more like me now that my Grandpa’s things are in it. I have a couple chairs, a cabinet, the grandfather clock he assembled as a kit, and the many books. When he started getting old enough that he repeated himself often, he would tell everyone that he never had aches and pains because he changed his thinking. He said it was all because of a book he read. About 10 years ago I asked to see this book, and he showed me. At the time, I thought to myself it was such a simple title I wouldn’t forget it. Well, I did forget it, and as my mom and aunt gave me permission to have any of my grandpa’s books, I took everything that looked like a book of deep thinking, everything thought-provoking, and I feel sure that somewhere among these books is this special one he spoke about and showed me, even though I struggle to remember what it looked like. 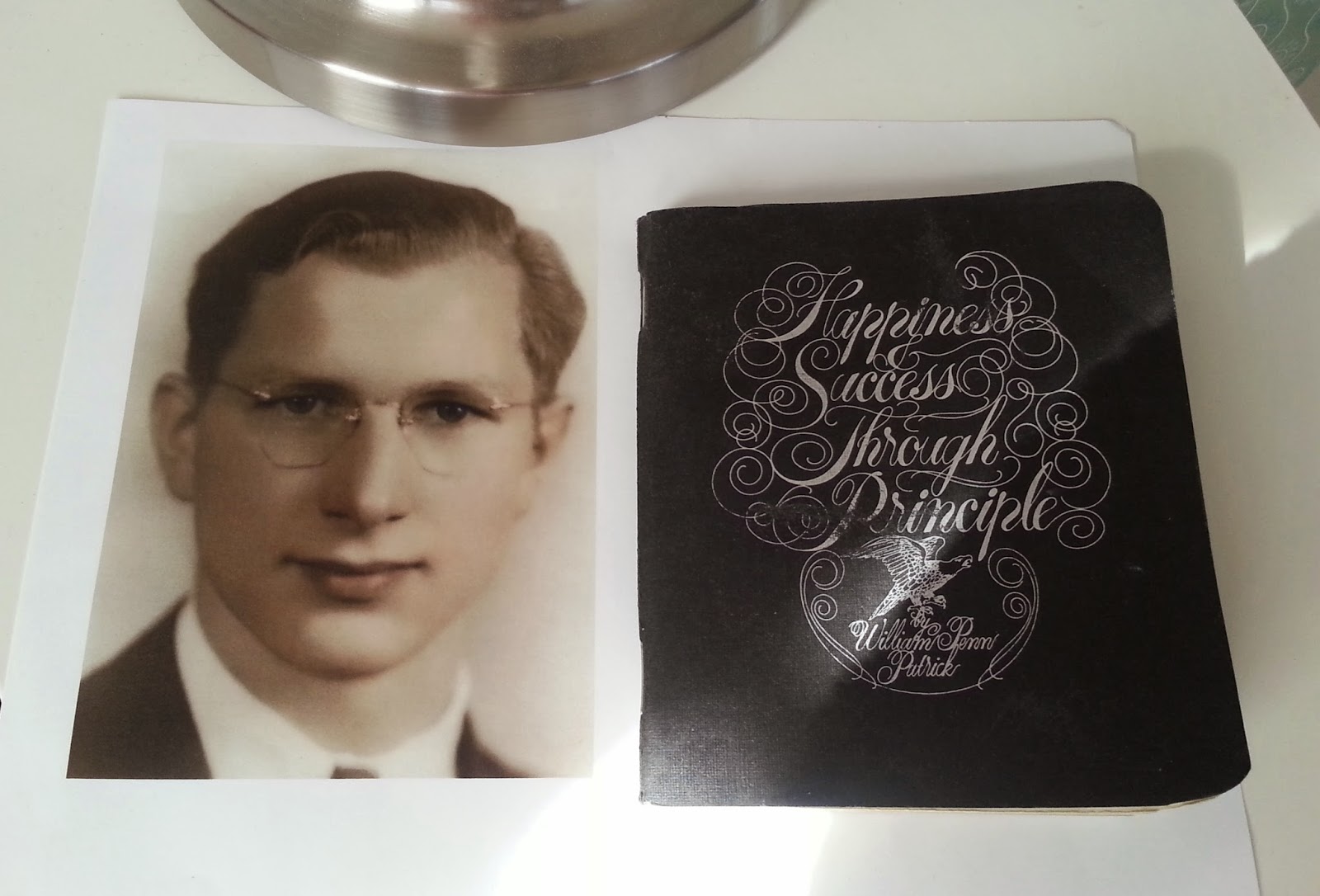 Most of the books of Grandpa’s could be considered a book that “changed my thinking”. They are all in line with my desire to better myself, learn healthy perspective, and to generally be happy. If you know my blog, you know how important I feel happiness is.

It’s a miniature little book, like one made to keep in your suit pocket for quick reference. A corner is slightly bent, so I can’t help wondering if my grandpa did carry it around for a time.

One of the great parts that caught my attention in this little book is at the beginning. It says:

“Every human has sought to find his place in the pattern of this eternal universe. Each of us has sought to find security and happiness. Most have looked in the wrong places to find their happiness. Most have sought their answers in the lessons of some religion only to find frustration and greater despair. Many have turned to education only to find in its abundance a barren futility. With reckless abandon many have turned to individual and mass destruction only to find a meaningless death. Yet others have placed their lives and faith in other individuals, in situations, and political concepts only to discover the chains of bondage.

Where then doth the soul find its place to live and die? Out of this despair has come the twisted and murderous history of the human race—man destroying himself and his fellow man at an ever increasing rate. Three billion people live today on the face of this earth, in the shadow of self destruction. What is the curse that has brought humanity to the edge of this abyss? What leaves our young men and women who stand at the threshold of greatness turning their backs to the future and retreating to the abyss of disaster? The primary answer is fear—fear of themselves—fear of their fellowman—fear of tomorrow.

The substance of fear is ignorance. Man in his education and sophisticated world lives in ignorance and fear, which it breeds. In a narrow sense, fear cannot exist in the face of knowledge. In the absence of knowledge, fear reigns supreme.”

To those that know me: can you see why I think me and my Grandpa are so much alike? Mr William Penn Patrick really resonates with me! I’m totally interested in things like this--reading what people with clear perspective have to say. This kind of thinking is invigorating to my spirit. Like a clean glass of water. Refreshing and satisfying. It makes me feel I am not alone in my desire to live in a world without war, murder, fear, and destruction.

He continues:
“Assume for a moment that you were a front line soldier--you were ordered to destroy a machine gun nest--and your only approach to it was by way of an open field. To cross that open field would require courage, and since your knowledge of the situation clearly indicates death, you are seized by fear. On the other hand, if you knew without a question that you could cross the field and destroy the machine gun nest without any harm to you whatsoever, you would absolutely have no fear of the situation. There are several important things which can be learned form this. Knowledge eliminates fear, and in the presence of knowledge no courage is required. In the absence of absolute knowledge courage is required to act. Belief and knowledge are two different things. In the presence of belief, fear becomes an active participant. Belief and fear are bed partners in the absence of knowledge. Man exists as the highest level of earthly creation. Man has the capacity for knowledge as well as for fear. Fear requires no effort. Knowledge does. Consequently, it is obvious that the price for freedom is the effort required to gain knowledge.

Man is born in the bondage of his physical limitation and mental laziness. He is born in ignorance and fear abounds his existence. Only as he gains knowledge of his surroundings does his fear begin to subside. Man is not born free. If he is to be free--he must earn it. The price is knowledge. He was given a body and a mind. To gain, the body requires food. To gain, his mind requires work. In essence, there is nothing of value for free. Everything has a price.

This leads me to the point of the principle which I have discovered as the foundation of my security and happiness, which is success. My first inclination is to do as most men do.  That is to confuse the issue by a lengthy analysis of the several specific issues available. A volume of one million pages could be written on the general subject with a discussion of ha many angels could stand on the head of a pin, to the other extreme of--how did the earth get here? Since I do not wish to enhance my ego, and since my purpose is to sincerely share with everyone those things that I have discovered to be true, I will only give you the principle, knowing that when you understand the principle you will then apply it to the many available issues before you. Remember, Men do not make principles. Principles make men.”

Mr. Patrick goes on to say so many more things in this little book that I will try to share in time... For now, lets acknowledge: Fear is effortless, it's lazy, and it does not serve us. As I’ve said before, it’s pretty damn easy to test what you fear and find out if you are A: Right in being afraid, or B: Fearing needlessly. I personally would rather know. Saying that, I’m reminded of a quote.
“We don't see things as they are, we see them as we are.”
― Anaïs Nin

Email ThisBlogThis!Share to TwitterShare to FacebookShare to Pinterest
Labels: Happiness, Self Knowledge