Nobody had a perfect childhood… one parent or two, I don’t care. Just try find me someone who had it easy and doesn’t have trauma of any sort. They don’t exist, or… I have yet to meet anyone from this minority. 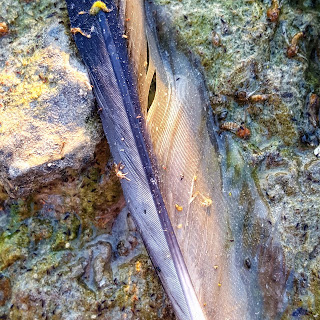 When I think of how I was raised, some of the shit I went through, in all colors of the rainbow, I could pull out the blame card. But that is like a dead end to me. To blame someone for something is like saying “You did this, and I have zero control to change it”.

It was a friend in search of the most accurate word for what she was saying about her father that brought out her blurting "Accountable!" When people refuse to be accountable for any reason, they do themselves a disservice. Because it doesn't matter if someone else inflicts anything on you -YOUR movement forward or LACK OF is your call. Blame is the way to insist you remain frozen in the past of the experience and “can’t” change anything.

If someone set you on fire, would you choose to stand and burn? Or would you jump into a pool of water next to you? If you choose to stand and burn, you’ll die. Most examples I can think of as it pertains to ME BEING OK have ME being accountable for my choices after someone else is involved in my pain. And no... others aren't always involved, so I need to take accountability in those situations too. And deal with it! Whatever IT is.

If I cut my hand, if my heart gets broken, if I invest too much into something temporary, whatever it is if I'm not ok, I MUST BE THE ONE TO FIX IT.

This has nothing to do with being single or not. I'm not saying that since you’re alone you have to move forward alone. I'm saying that your personal health mentally, physically, spiritually, it's all in your hands. JUST YOURS. Nobody else is going to make sure you are ok... nobody can actually. However much you want THEM TO. And yes, others can help by making you feel supported, but it’s all still yours.

The ‘I have zero control’ statement is one I won’t be making. So when I talk about my childhood, or things that I have to address, I’m not blaming my parents… I’m pointing out the reasons why I am now dealing with something that is very real, and that I need to change.

If anyone ever mislabels what I’m saying, and uses the words, “You are blaming your parents” then you have not listened and have totally missed the point. I don’t need to blame. I need to understand, and then use that understanding to move forward. The word blame is like the word guilt for me. It’s useless, it’s a stupid emotion, and I have no need to feel it/them… guilt or blame…

How we deal with whatever it is/was depends on many things. But the main one is Accountability. Sure, people have different ways of dealing, and I personally find crying extremely beneficial. Actually, crying is something I usually struggle to NOT do. I cry easily and often for any emotion that is large. It’s so rare I can actually hold tears in.

Recently I experienced something related to trauma from my childhood. I did not pull out the blame card. I accepted it was something I needed to deal with and change my perspective on…. And then THIS had me thinking, writing, and crying. I was so damn annoyed with the amount of crying. And it wasn’t just one day. It was two days with some lingering tears on a third. That is no little thing…After writing about it, and allowing myself to cry, I don’t have to even come close to blaming anyone. I am the one saying, this thing is not nice. It hurts, it’s something that is upsetting, so it is something I need to fix. How do I fix it? Mostly I cry. I work it out in my mind... I admit how I feel, I look at it at face value, and I accept it's real. I have a great example of someone who has done this countless times in this life, and I turn to her for as an example of accomplishment in "overcoming" anything... how she puts it is "We are on a journey to enlightenment. Not all people are willing to accept that, so they might waste their life, but many of us aren't."

Because of the desire to get help, I want to add: If you want to know what someone else CAN do... like the only thing they can actually do... They can give you love. Which is Icing! It’s just the extra. Don’t expect icing & extra, just be grateful if you are lucky to have it also. I am lucky to have examples AND icing.