I’ve always had a hard time with the “we are one” concept as it pertains to us all being connected. Although I do feel oneness; I feel entirely alone. As just ONE. I have experienced being 1 of 2, but for the most part, my life has been me and The World. I really struggle to understand this universal oneness and always have. I feel so singular and alone being shown in every stage of life not to trust anyone, not to rely on anyone, and that singularity is what the deal is. I believe there must be people out there that feel this too, and there must be people out there that never feel they are alone. That “universality” people speak of as us being part of—I want to know better.

On the smallest of levels I can feel joined to others. I can understand hardship, I understand love, I know joy, and I’m very aware we “share” in these. But the singularity I’ve felt my whole life has me reading a book called the Language of Silence and feeling awe at what he describes, and wishing that I could know too what he explains when he talks about this oneness; having telepathic communication with a monkey named Just Joe. 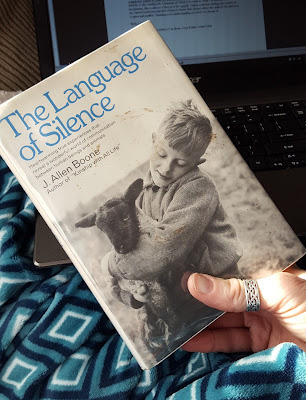 In the chapter Thought Bayonets, he says:

“The silent but effective correspondence that went on between Just Joe and myself, during those intimate sessions, was never the functioning of “a superior human brain in my skull” with “an inferior monkey brain in his skull”. Just Joe and I, in that rather uncommon experience of ours, were individual inlets and outlets for the everywhere-present and everywhere-operating Mind of the universe –like rays of light and warmth in their relationship with the sun.

The more practiced I became in finding how to establish the right kind of two-way thought traffic with that monkey as a fellow state of consciousness the easier it became for us to move along together in a mutuality of knowing … of being … of doing … of sharing … the easier it also became to speak silently to that monkey so that he could instantly understand me, and for him to speak silently to me so that I could instantly understand him. He and I were accomplishing, through the lovely and invaluable language of echoing heartbeats, a language that is ever moving from out of the silence through the silence and into the silence. But a language, I also had to learn, that can be spoken and heard only by those whose hearts are sufficiently pure for such cosmic inter communicating.”

I feel rather speechless at reading this. Its so eloquently written and so full of the genuineness I seek everywhere in life. Because the closest I come to not feeling so alone is when I feel a persons genuineness radiating. What seems to always accompany their genuineness is love, and love is the only real doorway to feeling less singular. And maybe that is stating the obvious. This is probably true for everyone.

Staying on the subject of what J. Allen Boone writes about in this quote but slightly changing topic, I have to mention something that keeps shouting at me to acknowledge. Two posts ago in Trauma Drama I write about a rabbit my dad pulled out of a bush by the ears, and as it screamed in terror, he held it there and shot it. As I read J. Allen Boone’s words about echoing heartbeats and it being in and through silence we communicate and understand one another, my memory of the screaming rabbit has me not just horrified but wanting to apologize because I’m not in that space of having a heart “sufficiently pure” that I could hear that rabbit before it was too late. That sounds corny to even my ears, but if you can imagine how J. Allen Boone would hear me say it (he’d understand perfectly) then you might feel what I’m feeling—a desire to know that silence, a desire to know that oneness; the “Mind of the universe” operating “like rays of light and warmth in their relationship with the sun”. We are existing in a state of separateness. The MAJORITY completely unable to relate to communicating with a monkey or a rabbit. And since nobody is also reading the Language of Silence to relate to what I’m finding so fascinating, this is almost a blog post for myself. Unless someone finding this relates to my clarity/confusion and also wishes to know that silence where the mind if the universe is open and audible. Handing over understanding on levels we dream of.

Well, I dream of.

Can you imagine what it would feel like to experience  "a language that is ever moving from out of the silence through the silence and into the silence".

I will admit… I don’t believe I’m alone, even if that’s what I feel.
Posted by Natalie And at 2:55 PM