I've just discovered a band and song I can't stop playing.
I'm such a wordie... often a song or lyric resonates with me, but my conscious mind doesn't always immediately know why.
I've listened to this song countless times, and I have just decided to grab the lyrics and follow.... I'm in awe.
For me, there are so many hidden meanings in this song. I'm impressed to the hilt and will admit it is to-date one of my favorite songs of all-time.

Would you believe that in my exploring of this band online, I learned they will be playing near me this coming Sunday... I bought tickets faster than I can eat a peanut butter cup....
I will update this post after the concert. And I will warn you now, I might be overly giddy in my writing.

The band is Savoir Adore. The song is Dreamers

Won’t you come here?  You know the way, it’s the one you made.
Built it in the sky, all that’s in your eye, now,
Not the same.  Watch it tumble down, falling all around.
Can you stand watching it undo all that’s made of you?

Now you see: what you thought was yours could never be had.
Take a look around, try to understand, that,
It’s a game that you’ll never hold onto very long.
Where we are isn’t just a place where everything remains.

Not the same.  Watch it tumble down, falling all around.
Can you stand watching it undo all that’s made of you?

Savoir Adore update
The Concert…
E-ticket said doors open at 9.
I’m a real organized person, I don’t like missing anything, so my friend and I arrived at 8:30. My whole day centered around this concert, so there was no reason to be late.

Knowing the venue (Urban Lounge) was 21 and older, I kinda hoped we could go in and maybe get a coffee on arrival. Since it was Sunday, coffee shops were closed! I know I was being an optimist in my hope I could get a coffee from the bar and sit with it while we waited for the concert to start, but I don’t drink alcohol, and coffee was what I fancied.


Parking right in front of the door, we got out and spoke to a guy changing the words on the marquee outside, he said they weren’t open yet, and suggested a place around the corner for a coffee. He said don’t worry about coming back at 9, leave it a little later.

My friend and I went to the Vegan restaurant Sage’s and ordered our drinks. The night was a perfect temp, the restaurant had wonderful ambiance of fairy lights overhead, a Troubadour playing his guitar, and beautiful greenery all around. As we sat outside under a large tree discussing whether or not we should also order the delicious desert our waiter told us about, I started to dig into my purse for my wallet.

I didn’t want to attend the concert with my usual purse full of crap, instead I wanted something that would hold my camera, and hang across my chest with a long strap. On the foot of my bed I assembled the contents that would go with me. I went through my wallet, pulled out cash, some coins, my ID, and a credit card, put them in a handy sunglasses case which resembles a coin purse. I only wanted to carry around camera, phone, tickets, pen, ‘wallet stuff’. No need to bring anything more to a concert.

As I dig, I did not feel the plastic coin purse. My eyes went wide as I looked at my friend and quickly emptied the few things onto the table. I had every intention of buying the Savoir Adore CD’s and getting them autographed… I must have left it on the bed! The lack of coin purse meant I was going to miss out on buying music! Disappointment City! I grabbed the car keys, and headed to the car, leaving my friend to wait for drinks and hoping I just managed to drop the coin purse on the floor of the car. My mind was racing, so I called my sister who lives nearby and I asked her if she had any cash she could lend me. The coin purse was not in the car, so 15 minutes later she met me outside the restaurant and gave me forty bucks. I would have my music after all!!

At 9:25 coffee finished, we stopped talking to the friendly Troubadour and went back to the Urban Lounge and got in line. As we neared the bouncer, I saw him scanning ID’s. My heart skipped a beat… I didn’t have my ID! I turned to the girl in line behind me to reassure myself, and I said “I look over 21 right?” she gave me a short “Ya.” And I approached the bouncer.


“I’ve left my wallet at home. I’m without my ID, but you can tell I’m over 21 right?”
He replies, “I can’t let you in without ID, it’s the law.”
Someone in line said loudly, “She looks 14, don’t let her in!” To which I only mentally giggled because I was outwardly freaking out that I might not get to attend this concert I was excited about. “I’ve been looking so forward to this!” Was the only thing I could think to say to him, not believing the level to which my heart was quickly sinking. I think I even stamped my feet. *clenching fists*
”Go home and get it.” The Bouncer said. I whined, telling him how far away I lived, and that I wouldn’t make it back in time.
Suddenly Paul (the male singer of Savoir Adore) walked out of the building between me and the bouncer.


“Paul” I shouted, “He won’t let me in, I’ve forgotten my ID, and I was so looking forward to seeing you guys.”
I have no idea why my normally shy personality thought I should call to Paul for help… Hell, crazy fan who’s so stupid she forgets to bring her ID to an over 21 venue, doesn’t come across well blurting out her situation to one of the Band members.
Paul turned, smiling and coming over to me to hear me whine and drop my shoulders in disappointment. He was totally nice, telling me he wished he had clout and could do something to help.


I saw my thoughts of a wonderful night melting away in front of me, and making myself look as stupid as I could to one of the reasons I was there.
Someone in line, interrupted with, “Go now, try to make it back in time!”
I turned to Paul and said “What time are you on? And for how long?”
He said they would be on at 10:15, and for 45 minutes.


My friend said, “No possible way we’ll make it.”
”Should we just try?” I asked her, and within what felt like only a second, we were running away from Paul and climbing in the car. (I was all a panic, so I have no idea if I even gave him a parting greeting.)


In frustration with myself, embarrassment over the situation, disappointment this was happening, and feeling generally a mess in anxiety; we drove to my home at 80-85 mph.
I’m a very calm, collected, sensible person. I pride myself on this, and all these unfamiliar emotions played havoc in my head.
After 45 minutes each way, (coin purse picked up from the foot of the bed) we were back. It was the same bouncer taking tickets and ID, and I was sure to let him know his assumption of how long it takes me to get to my home is wholly inaccurate. He replied, well you made it in time, cause they haven’t started yet. “REALLY?” I said in sudden lifted spirits.
”Yes, the opening band just finished, so Sea Wolf starts shortly.”
”oh….” My shoulders fell again… I had MISSED the concert after all. Remember me saying I don’t even like to be late?


Time to at least buy my CD’s!! We went in, and right there was Merchandise table. Wha-do-ya know, Diedre; the other singer was manning the table! I would get to meet her too!
I was so overwhelmed at this point my memory won’t recall my exact words to her, and my vanity doesn’t want me to share the things I do remember saying…. I was such a “silly fan”. I asked to buy each of their 3 CD’s. She was so gracious, so kind, and was genuinely sad for me having missed seeing them perform. She said Paul had already told her about 'a fan who had to leave to get her ID', and said she wanted to throw in a poster. (*Awe*) I suddenly remembered my camera and asked for a picture with her. She happily obliged. (I feel as though I’m blushing even as I write this. I am not used to being in a position of Adoring Fan -outside of my own office, sitting on my yoga ball, singing along to their songs and bouncing my way through refresh a hundred times.)


Then Paul appeared… My friend took another picture with me and them both. For the sake of my pride, I had to try and explain why I tackled him at the front door. I doubt this helped my case any towards looking less immature.
He then remembered me writing on their fb page a few days earlier, said he was the one who liked it, and when Sea Wolf suddenly started playing, we pretty much had no choice but to stop speaking. I nodded and mouthed Thank you, and took myself off to the edge of the crowd to listen and enjoy the concert I would actually be present for. My friend suddenly realized she knew the music and squealed in excitement as she headed in dancing.

I stood there with the biggest stupid grin, taking in the craziness, the beauty, and trying to release the anxiety of it all. Sea Wolf played and I realized the concert I was about to enjoy was also very much my taste. Awesome Sauce.

As long as this update is, I leave out many details which include my perspective on ‘everything happens for a reason’. I suppose after it all, I might be a fan that gets remembered… *rolls eyes*

At the end of the night we ended up out front speaking to Paul again, as they packed up all their gear and themselves into a van with New York plates. (They are from NY, and literally 'on tour'.) I hope I conveyed without too much corniness, I’d like them to return one day so I can actually enjoy them live.

I’ve already made my To Do List for that concert.
1. Get Dressed.
2. Put money and ID in Pocket.
3. Grab tickets.
4. Don’t give myself any reasons to look like a fool.

My utmost respect to all the members of Savoir Adore, they were all very kind and gracious, being very genuine in their appreciation of fans …including this silly one.
*bowing* 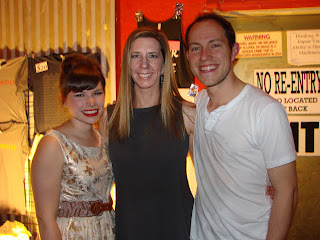 The AMAZING music, the foot of the bed, and the infamous coin purse! 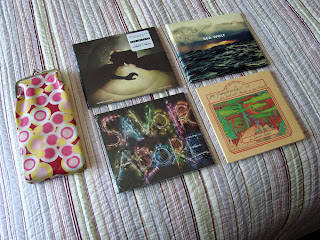